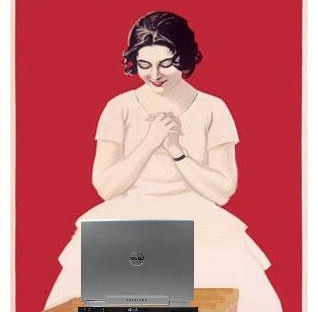 Six years ago I stopped blogging here at LP because I became a mother for the first time and suddenly the style of discourse that dominated here became jarring. Newly immersed into the constant and somewhat shocking demands of motherhood, I found it impossible to engage in the combative debates that were par for the course here at LP. So I retired to my personal blog, which rapidly morphed into what is now so charmingly described as a ‘mummy blog.’

On a personal level this so-called ‘mummy blog’ of mine did a lot for me. It helped me to connect to other people (mostly women, it must be said) who were experiencing the transition into parenthood in similar ways to me. It helped me to fight off the crushing isolation of the early months of my daughter’s life, when I knew so few other young parents and had few reasons to leave the house. It also helped me to gain confidence in my own approach to mothering, and to discover that what I was experiencing was quite normal and would get easier with time. For me these benefits were an absolute lifeline and I shudder to think of how I would have coped with out them.

However, so-called ‘mummy blogging’ is not a purely personal endeavour. Despite the gleeful mocking of ‘serious bloggers’ and ‘hilarious male columnists’ the issues explored by ‘mummy bloggers’ are often highly political. For many women of my generation, motherhood is a time when we are confronted with the full force of patriarchy and the seemingly insurmountable challenge of maintaining equality in our relationships, let alone within society, after becoming mothers. The shift in dynamics begins with the vulnerability of pregnancy, when our bodies suddenly seem to become public property and we are thrust into a medical system that strips us of our rights and treats as like children. It continues as many of us take time away from the paid workforce to care for our children and find the dynamics of our relationships changing as a result. For those of us who breastfeed, the public desire to control our bodies rolls over from pregnancy and continues with the ever-helpful social pressure to breastfeed our babies for the arbitrarily determined length of time that Western culture sees as necessary, while ensuring at all times that we do it in a manner than inconveniences and (most importantly) offends no-one (i.e. at home).

Taking time out of the workforce can also force us to re-examine our relationship to the economy and to the government – on whose services we find ourselves far more dependent. This raises highly political public policy issues around the structure of taxation; the regulation and funding of health care, childcare and education; and a whole range of planning issues as we find ourselves spending a lot more time on the ground in our neighbourhoods and notice the physical landscape in entirely new ways. For example, when you are pushing a stroller around your neighbourhood or the city, you are made keenly aware of the distinct lack of accessibility of so many places and the daily challenges experienced by people who use a wheelchair or other mobility assistance. Caring for young children in public spaces also heightens your awareness of how little accommodation is generally made for their needs in Australian culture. Very few places have clean, safe places to change a baby’s nappy. Sinks are all at adult height, making it impossible for a child to wash their hands alone. People have little tolerance for normal age-appropriate behaviour, expecting children to behave like adults or to stay at home. And on it goes…

In my experience of both writing and reading so-called ‘mummy blogs’ all of these political issues are regularly discussed, but the entire genre is dismissed as not only personal (and, thus, somehow apolitical) but as vapid and embarrassing. Parodies and critiques of ‘mummy’ or ‘mommy’ blogging convey the impression that women who dare to write about their children and their experiences of mothering are self-indulgent, privileged and, crucially, undeserving of public space. Nowhere has this been more evident than in the media’s unrelenting criticism of the Prime Minister for meeting on several occasions with so-called ‘mummy bloggers’ at both the Lodge and at Rooty Hill RSL (the use of the term on these occasions, in particular, clearly underlies the inherent sexism in the manner than these female bloggers – and, indeed, MSM columnists – are being portrayed, since many of them are not, in fact, mothers and write about entirely different issues).

The underlying message of these parodies and critiques is that mothering is a highly private act that does not belong in public discourse and, indeed, has little of value to contribute. The idea is that until women leave the private sphere and (re)join the paid workforce, their perspectives and experiences are irrelevant and intrusive. In this context, I would argue that ‘mummy blogging’ is actually quite a radical act, through which women of my generation are claiming a share of the public sphere and demanding recognition for the work that we perform and the relevance of our experiences to public policy.